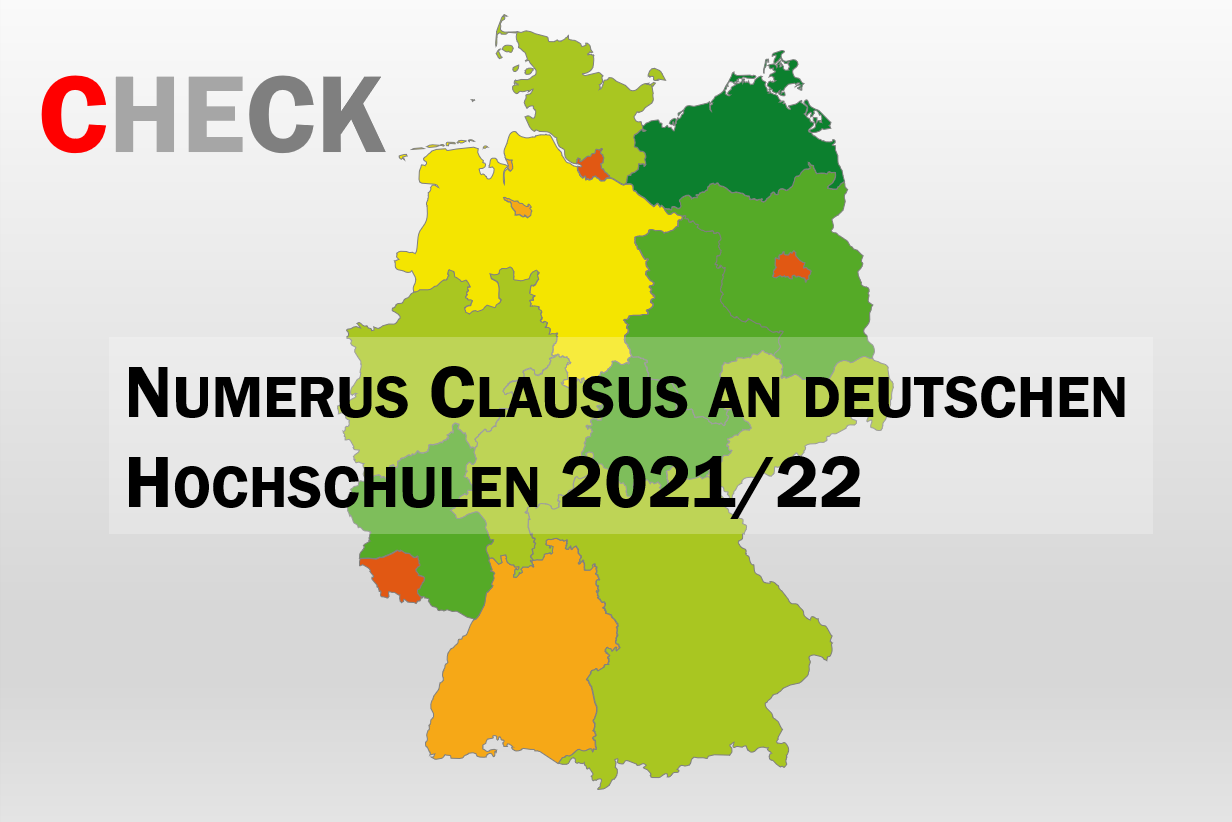 Every year in Germany, around 900,000 people start out at university. The majority of degree programmes are open to all first-year students, irrespective of their Abitur examination grades. Only around 40 per cent of all degree programmes starting next winter semester have restricted admission, referred to as numerus clausus (NC). Hamburg, Berlin and Saarland have the highest percentage of restricted-entry degree programmes. This is the conclusion reached by the annual CHECK Numerus Clausus conducted by the CHE Centre for Higher Education.

Two-thirds of degree programmes starting this winter semester 2021/22 in Hamburg, Berlin and Saarland are subject to restricted admission. Hamburg has the highest percentage in the country (65.2%), followed by Berlin (65.1%) and Saarland (63.3%).

Students have the best chances of getting a place at university in Thuringia and Mecklenburg-West Pomerania, where only one in five degree programmes are subject to restricted admission. Nationally, the proportion of NC subjects has fallen for the fifth year in a row, and currently stands at 40.1 per cent.

“The fact that more than half of all degree programmes are open to prospective students from the current school leaving year, which has been a most unusual one, without admission restrictions, is an important and good signal,” stated CHE Executive Director Frank Ziegele, commenting on the findings. “Federal states such as Lower Saxony, North Rhine-Westphalia and Hamburg have managed to reduce their proportion of NC subjects by six to ten percentage points over the past five years. The decline in the number of first-year students may also have played a role in some states. Higher education institutions adapt their numerus clausus restrictions to demand,” Ziegele explained. 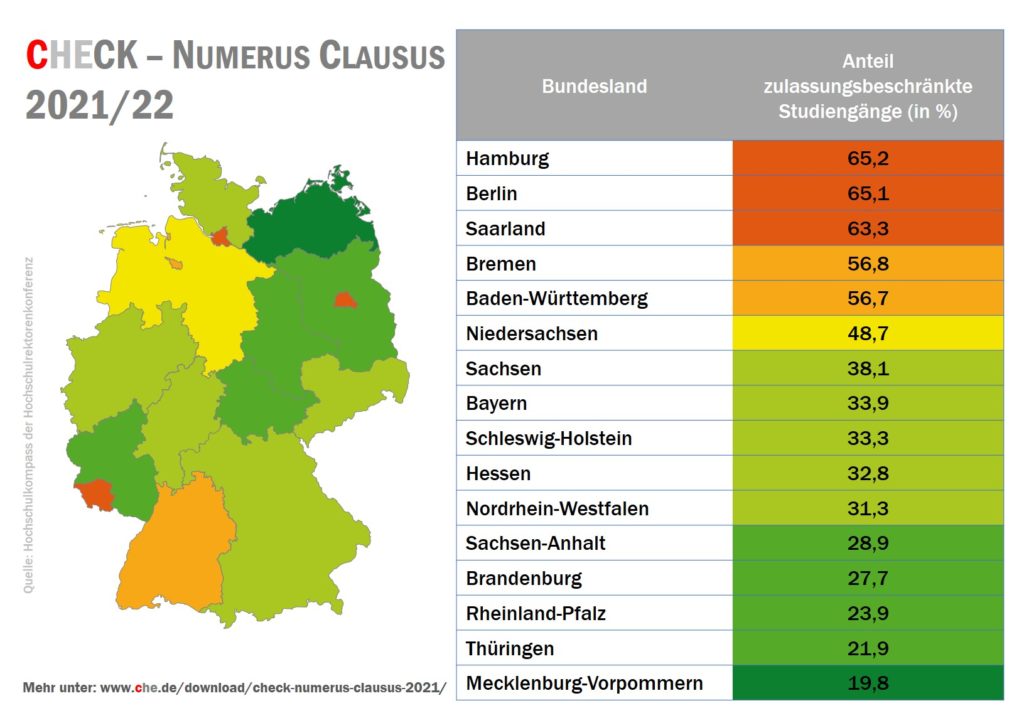 Substantial differences can still be seen when comparing cities. When it comes to securing a place in a university city with a student population of more than 50,000, applicants have the greatest chance of getting in at Dortmund. According to this year’s analysis by CHE, this city has an NC rate of 23 per cent. The highest percentages among all university cities with a student population in excess of 17,000 were recorded in Saarbrücken (65%) and Leipzig (63%).

“It is interesting to note that seven of the ten cities with the highest proportion of NC subjects managed to reduce their share of restricted-entry degree programmes compared to the previous year,” remarked Cort-Denis Hachmeister, the author of the study. This was particularly the case for popular students cities such as Cologne, Hamburg, Leipzig and Munich, he added. 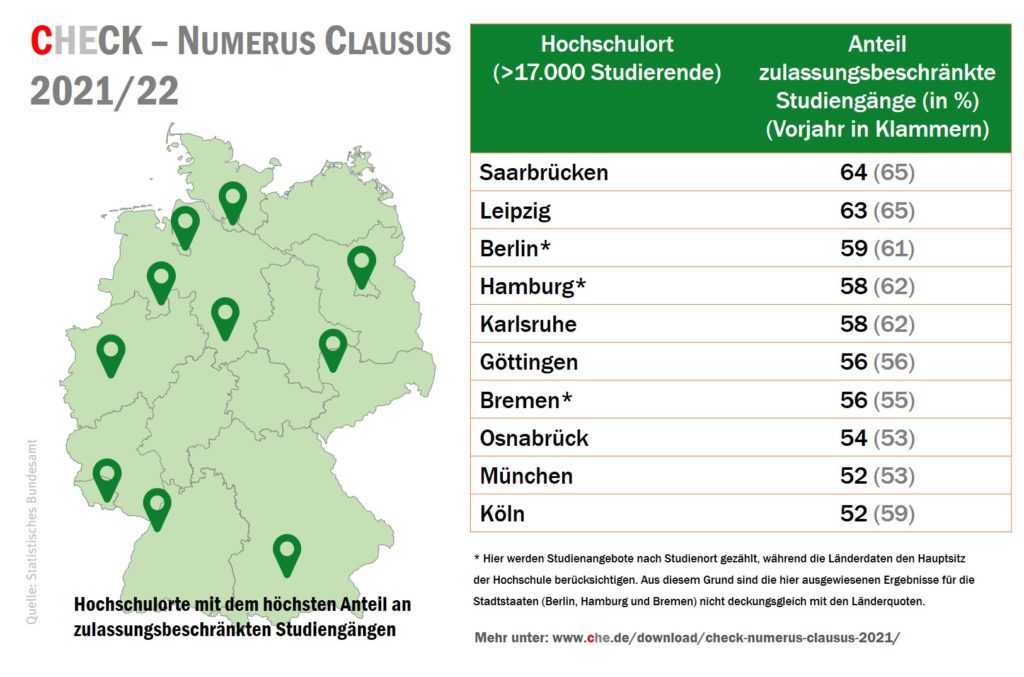 The CHE expert for access to higher education also recommended that prospective students take into account other HEIs that are further afield or located in an adjacent federal state. “There are often equally good degree programmes without restricted admission available at neighbouring universities,” stated Hachmeister.

The proportion of programmes with restricted admission varies considerably depending on the subject, the type of HEI and the degree type: nationwide, about one in two degree programmes in the fields of law, economics, social sciences and humanities are subject to restricted entry. In contrast, around two-thirds of places on engineering degrees are open to all first-year students, regardless of their Abitur grades.

The “CHECK – Numerus Clausus an deutschen Hochschulen 2021/22” (CHECK – Numerus Clausus at German higher education institutions 2021/22” is based on NC data contained in the Higher Education Compass of the German Rectors’ Conference for around 20,800 degree programmes in winter semester 2021/22, as well as relevant data from previous years. Percentages for federal states were determined with reference to the place where the university’s main location is based. In the case of location-specific NC figures, all degree programmes offered at the study location are counted. This means that, in the case of city-states, there may be minor deviations between the percentage in the federal state and that in the city. The federal state, type of higher education institution, degree type and group of subjects were used as criteria for the analysis conducted by the authors Anna Gehlke, Cort-Denis Hachmeister, Elisa Himbert and Vanessa Seitter. All diagrams from the CHECK are freely available in the CHE Flickr Cloud to anyone interested.