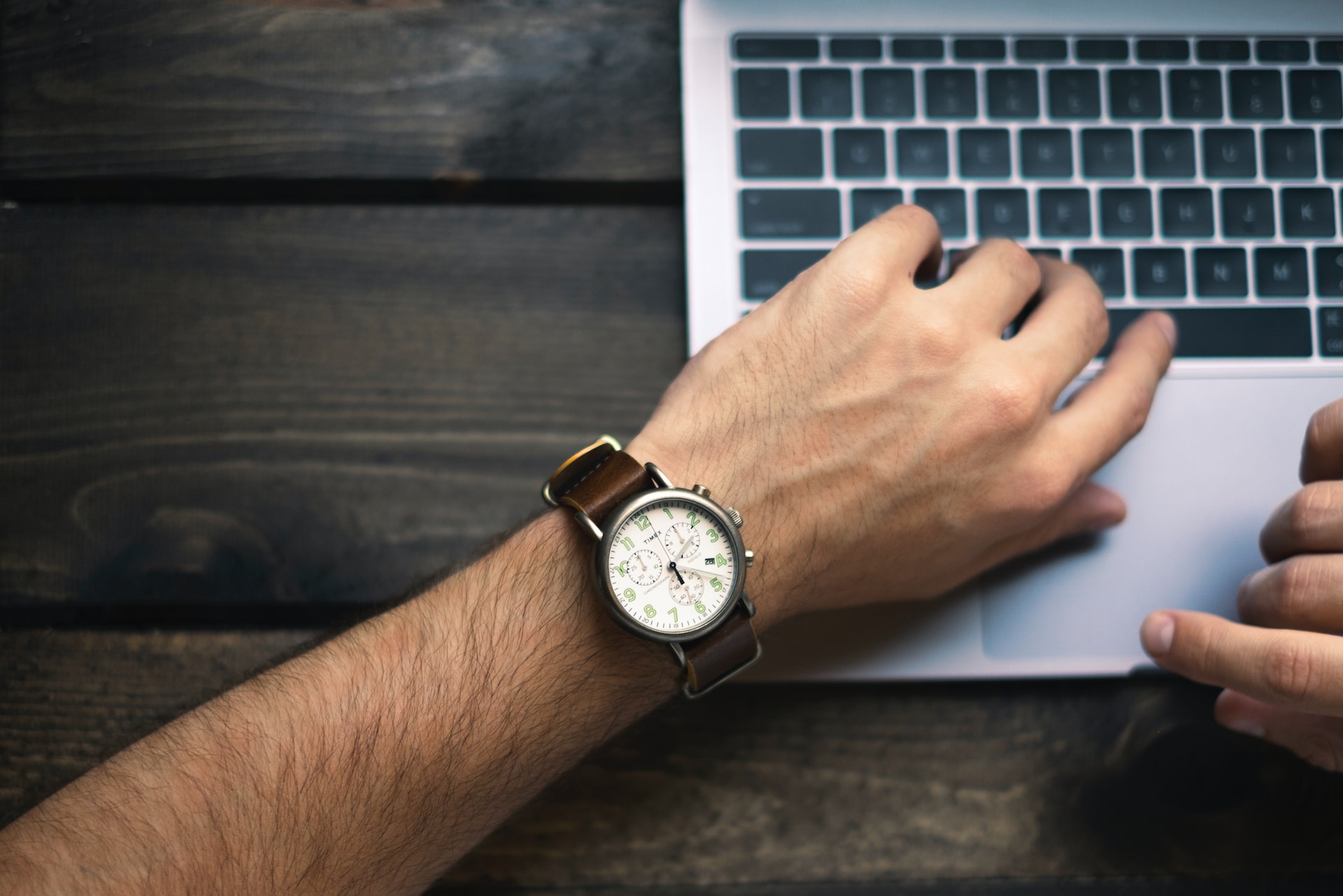 The number of people studying part-time in Germany has risen to an all-time high of around 231,000. Germany’s federal states with the highest proportions are Hamburg, North Rhine-Westphalia and Mecklenburg-West Pomerania. While more than a third of the student population at private universities study part-time, this figure is only four per cent at state-run institutions. These are the findings of a current evaluation by the CHE Centre for Higher Education. The data from the evaluation are now also available in CHE’s new data portal www.hochschuldaten.de.

According to data from the Federal Statistical Office analysed by CHE, around 231,000 people were officially studying part-time in winter semester 2020/21. This equates to an increase of around 8,000 people compared to the previous year. The proportion of part-time students, currently standing at 7.8 per cent, is higher than ever before.

However, the actual number of “de facto” part-time students – who are enrolled on full-time programmes, but take on a smaller workload and need longer to complete their degree – is likely to be much higher, CHE believes.

Germany’s federal state with the highest proportion is Hamburg. Around a fifth of students in this city-state do not study full-time. Then come North Rhine-Westphalia (13.3%) and Mecklenburg-Western Pomerania (12.7%). 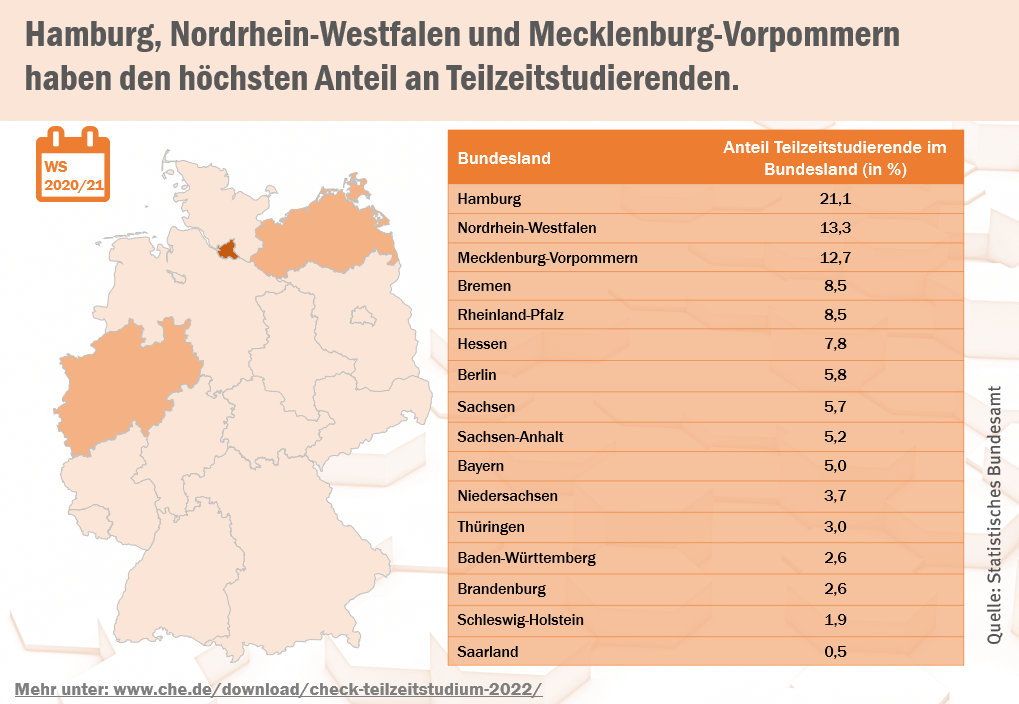 The supply side shows a very different picture. In 2022, 17.9 per cent of all study programmes were also available to students as a part-time option. Saarland, which offers part-time study options in two-thirds of its programmes, leads the field in this respect.

The annual evaluation conducted as part of the “CHECK – Part-time study in Germany” shows a clear imbalance in the distribution by university funding body. Around half of part-time students pursue their studies at a private higher education institution (HEI). Consequently, more than one third of all students (37%) at private HEIs in Germany do not study full-time. At state-run HEIs, this is only the case for around four per cent of students.

“While part-time options are often explicitly offered as a study model at private universities, they are still the exception at state-run universities,” summarised Cort-Denis Hachmeister. “This is due not only to the lack of eligibility for the BAföG student grant, but also to the fact that state-run HEIs require proof of eligibility for part-time study, involving various levels of red tape,” stated CHE’s expert for admission to higher education.

The federal and state-level data are available not only in this publication, but also on the new CHE Hochschuldaten (University data) portal at www.hochschuldaten.de. Interactive visualisations and tables are used in this portal to illustrate data on a wide range of higher education-specific issues at the federal and state level. The free-to-use tool also enables users to create individual analyses over time, as well as comparisons between federal states.

The portal at www.hochschuldaten.de provides interested users with a wide range of university data on aspects such as the housing situation for students, professors’ pay grades, and the development of the proportion of female students. In addition, selected results are discussed in greater detail at regular intervals in the portal’s data blog in a short DataCHECK – in the current case, for example, featuring additional material on the role of private universities in the area of part-time study.

The data basis consists of evaluations of various projects undertaken by the CHE Centre for Higher Education, such as the CHE University Ranking, combined with central data from the Federal Statistical Office. “Given that more than 20,000 degree programmes are offered at around 400 higher education institutions, it is becoming increasingly difficult for all those involved in the system of higher education to keep track of them all. By offering www.hochschuldaten.de, we want to help improve transparency and comparability in the education sector for all,” explained project leader Marc Hüsch.

On behalf of the CHE Centre for Higher Education, CHE Consult has been analysing the development of part-time study options in Germany since 2016. The publication entitled “CHECK – Teilzeitstudium in Deutschland 2022” (CHECK – Part-time study in Germany 2022) includes courses offered by HEIs and student demand for part-time programmes. The share of part-time programmes on offer is based on data contained in the Higher Education Compass provided by the German Rectors’ Conference for winter semester 2022/23. The percentages of part-time students are based on information provided by the Federal Statistical Office for winter semester 2020/21. Key information about the topic, checklists and an annotated list of links are available at: https://www.che.de/download/teilzeitstudium/

Additional federal state-specific university data on this issue and others can be found in the CHE Hochschuldaten data portal at www.hochschuldaten.de. Further detailed evaluations of the situation of part-time study at private universities can be found in a DataCHECK° at the following link.

Interview with Cort-Denis Hachmeister in Deutschlandfunk (02.11.2022 in German)