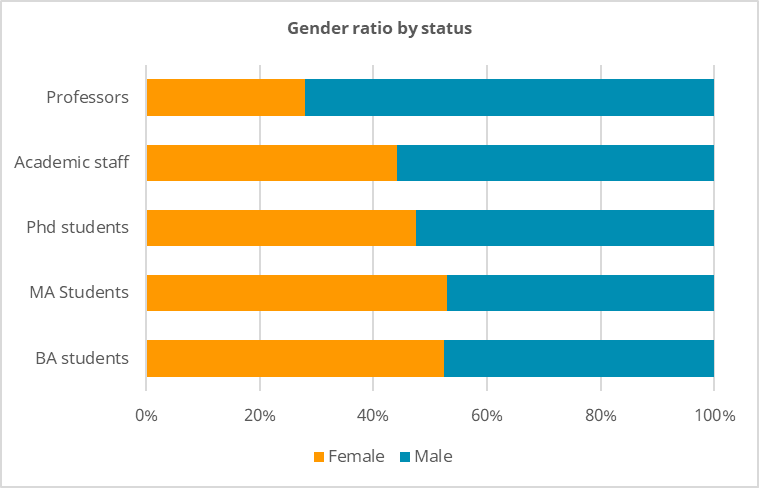 Today U-Multirank launches its analysis on gender balance. While gender inequality has been a major dimension of inequality in higher education, data from the 2021 U-Multirank edition confirm that still today there are strong gender imbalances among males and females in academic careers. While women in total count for half or more of bachelor’s (BA) and master’s (MA) students, their share is smaller among PhD students (48%), academic staff (44%) and professors (28%) (see appendix 2). According to U-Multirank data this pattern is very much the same among EU and non-EU institutions.

Furthermore, data from the U-Multirank subject rankings suggest that differences between study subjects still follow traditional patterns of ‘male and female study subjects’. While women are still a minority in most of the science and engineering subjects, both among students and academic staff, subjects like nursing, social work, education and psychology are still strongly dominated by women. In these subjects, the majority of both students and academic staff are female. In social work for example, U-Multirank found only seven out of almost 200 departments where men make up for more than half of the students.  Furthermore, at four out of five departments the majority of academic staff is female.

Among the subjects with the most balanced gender ratio are business studies, economics, political science, agriculture, history and – as the only science subject, chemistry. Here the percentage of males and females among both students and academic staff are between 40% and 60%. In many other study subjects, there are only a few, or even no departments with a balanced gender ratio (see appendix 3).

U-Multirank’s latest results not only give insights on balance among males and females in higher education, but as a multi-dimensional global ranking it makes transparent the detailed performance of universities. In doing so, students can make better informed choices about what, or where to study based on what matters most to them – including the gender balance of a study programme. Universities can use U-Multirank data to assess their strengths and weaknesses and find ways to create or strengthen their strategic plans, including aspects of gender balance.

Although a modern notion of gender requires more than a binary classification of female and male, the current data available for such an analysis is limited. Therefore, this analysis only looks at gender in a binary system, but will be improved upon in future years. As a first step in 2020, U-Multirank introduced the category ’non-binary/diverse’ into its student survey. Additionally, U-Multirank will continue to extend its definition of gender in ongoing and upcoming data collections, including surveys at the institutional and department levels, which are the basis for the U-Multirank gender monitor.

Graphic: Female shares from students and within academic staff by subjects

U-Multirank is a non-commercial, multi-dimensional global transparency tool, presenting more than 30 indicators on university performance across five dimensions: teaching and learning, research, knowledge transfer, international orientation and regional engagement. The 2021 release covers 1,948 institutions from 96 countries. All results are freely accessibly on the website.

Data for the U-Multirank gender monitor are based on a sample of 900 institutions that provided sufficient data on gender. On our website we present the gender profiles for individual institutions. U-Multirank is collecting data on gender on different, both institutional and subject, on different stages: students, BA/MA graduates, PhDs students and graduates, academic staff and professors. As part of its effort to include issues of social inclusion and diversity, U-Multirank recently started to collect gender data beyond the binary classification male/female.  The U-Multirank gender monitor brochure provides links to the list of institutions with a balanced gender ratio by subjects.

U-Multirank originated at a conference of the European Commission during the French presidency in 2008. Since 2017 it is funded by the Bertelsmann Foundation, the European Union’s Erasmus+ Programme and Santander Group. U-Multirank is developed and implemented by an independent consortium led by the Centre for Higher Education (CHE) in Germany. The Center for Higher Education Policy Studies (CHEPS) at the University of Twente and the Centre for Science and Technology Studies (CWTS) from Leiden University, both in the Netherlands, as well as Fundación Conocimiento y Desarrollo (FCYD) in Spain are partners in the project. The consortium is headed by professors Frans van Vught (CHEPS) and Frank Ziegele (CHE).