Part-time study is far from being established

CHEPart-time study is far from being established 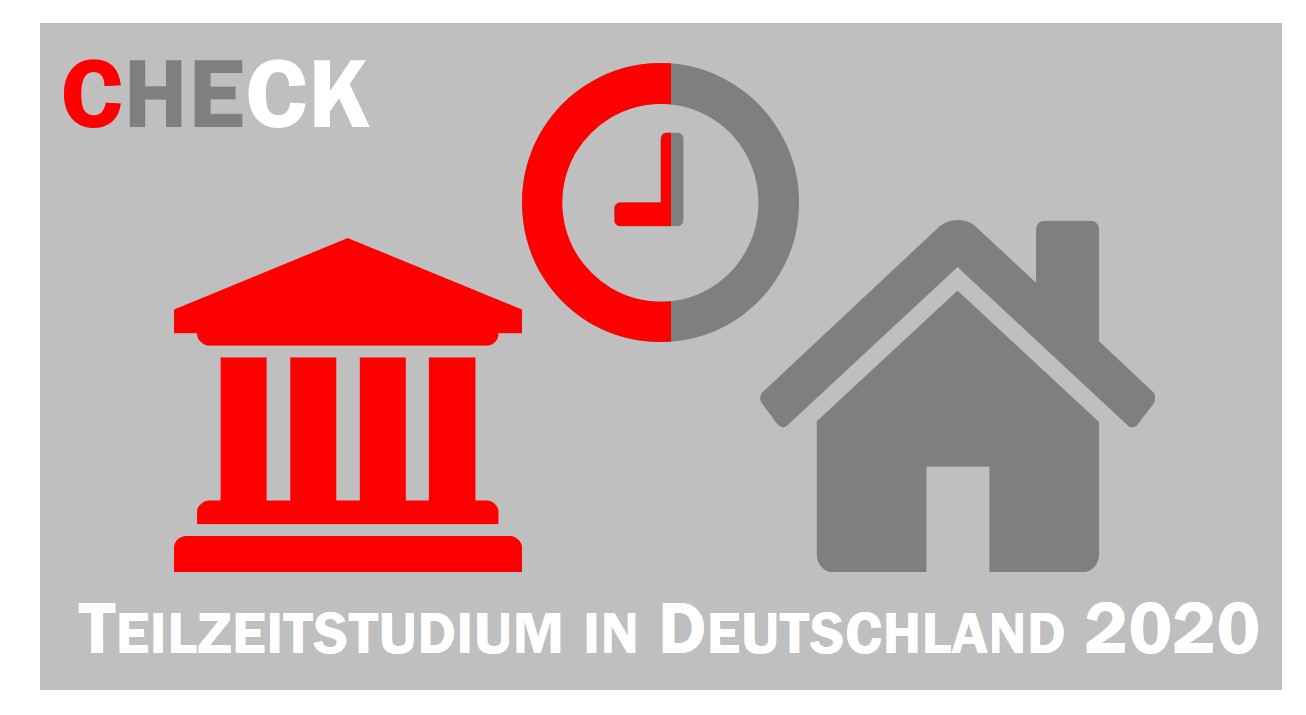 Around one-third of all gainfully employed persons in Germany do not work full-time. In contrast, despite the proportion of part-time students having increased to 7.5 per cent, part-time study is far from being an established alternative to full-time study. This is due to the framework conditions and the limited range of courses on offer, according to a recent analysis conducted by the CHE Centre for Higher Education.

According to the Federal Statistical Office, 214,000 people in Germany officially studied part-time in winter semester 2018/19. This equates to an increase of 11,000 people compared to the previous year. The proportion of part-time students, currently standing at 7.5 per cent, is higher than ever before.

Around half of all part-time students (100,000 people) are enrolled at a higher education institution (HEI) in North Rhine-Westphalia (NRW). However, the highest proportion of part-time students can be found in Hamburg, putting NRW in second place with 12.9 per cent. One in five students enrolled in this city-state do not study full-time. Saarland brings up the rear, with 121 official part-time students, which equates to a rate of 0.4 per cent.

“Flexible part-time models are well established in the working environment. Despite an all-time high, this is still far from the case in part-time university education and continuing education,” stated Frank Ziegele, assessing the latest figures. This is particularly the case with state-run HEIs, the CHE Executive Director added.

However, CHE believes that the actual number of “de facto” part-time students – who are enrolled on full-time programmes, but have a smaller workload and take longer to complete their degree – may well be much higher.

According to Cort-Denis Hachmeister, the less favourable financial framework conditions are one of the reasons for the low official figures for part-time students. “For many students, part-time study is generally likely to be much more expensive than studying full-time. One in two part-time students resort to pursuing one of the fee-based programmes offered at a private HEI. But the lack of entitlement to a BAföG grant is even noticeable when it comes to state courses that do not incur fees,” explained the expert on access to higher education at CHE.

However, another reason is likely to be the small range of part-time programmes on offer. According to data from the Higher Education Compass, provided by the German Rectors’ Conference, only one in six degree programmes in Germany are also open to students wishing to study on a part-time basis. 16.1 per cent of all degree programmes on offer this winter semester 2020/21 are part-time options. This figure represents an increase of 2.2 percentage points compared to the previous year.

Germany’s federal state with the highest proportion is Saarland; in this federal state, two out of three programmes (67.1%) can also be studied part-time. Hamburg and Brandenburg follow, with 53.8 and 46.4 per cent, respectively. The proportion of part-time study options was less than ten per cent in five federal states. Bremen brings up the rear, with a proportion of 2.1 per cent.

The share of part-time options at universities (17.2%) is slightly higher than that at universities of applied sciences (13%). Those wishing to study while in employment, for example, have a wider choice of programmes at the Master’s level (19%) than at the Bachelor stage (14.3%).

One fifth of all humanities and social sciences degree programmes can be studied part-time. The lowest proportion of part-time options can be found in the area of agriculture and forestry (7.7%).

On behalf of the CHE Centre for Higher Education, CHE Consult has been analysing the development of part-time study options in Germany since 2016. The publication entitled “CHECK – Teilzeitstudium in Deutschland 2020” (CHECK – Part-time study in Germany 2020) includes courses offered by HEIs and student demand for part-time programmes. The share of part-time programmes on offer is based on data contained in the Higher Education Compass provided by the German Rectors’ Conference for winter semester 2020/21. The percentages of part-time students are based on information provided by the Federal Statistical Office for winter semester 2018/19. Key information about the topic, checklists and an annotated list of links for prospective students are available here.

The publication is available in German only.