With this award, the weekly newspaper DIE ZEIT and the CHE Centre for Higher Education honour leaders of higher education institutions (HEIs) in Germany who have shaped the development of their university in a special way and initiated innovative change processes. This year’s award also goes to the colleagues who, in cooperation with the President, navigated the university securely through the crisis under the conditions of the coronavirus pandemic. 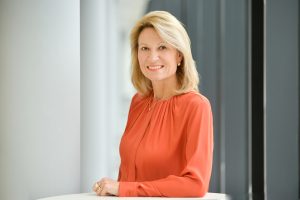 Prof. Dr. Anja Steinbeck, Rektorin der HHU Düsseldorf (Foto: HHU / Susanne Kurz)The legal expert, Professor Dr. Anja Steinbeck, has been leading Heinrich Heine University Düsseldorf (HHU) as its President since 2014. To Steinbeck, the university’s self-understanding is closely linked to her own understanding of leadership. “Just like our namesake sought to promote the rise of an emancipated civil society, HHU strives to ensure that citizens are able to form an independent, reasoned view of political, economic and social developments. Staff in my setting should work independently and perform their tasks responsibly. Open discourse is welcome.” Steinbeck also demonstrates this dialogue-oriented understanding of leadership in the way in which she addresses the challenges posed by the coronavirus crisis. “The President clearly took the lead when it came to crisis management. At the same time, however, she includes all those involved and makes optimal use of their capabilities, building on confidential cooperation,” stated her colleagues.

The jury emphasised: “Ms. Steinbeck presents a balanced picture in all of the aspects considered for this year’s award – good team support, an accurate self-evaluation, and innovative approaches to crisis management.”

In her laudation, Carola von Schmettow, Chairwoman of the Management Board of HSBC Germany and HHU alumna, emphasised: “Anja Steinbeck’s idea of a citizens’ university is a worthwhile endeavour because the great Enlightenment project has once again become highly relevant: reliably informed and emancipated citizens. It is the only thing that can save us from the consequences of populism and conspiracy theories in the long run.”

This year, six leaders of German HEIs were nominated for the award. Each and every one of them has demonstrated outstanding leadership. Among the six nominees is Professor Dr.-Ing. Dr. Sabine Kunst, President of Humboldt-Universität zu Berlin. Ten years ago, in her role as President of the University of Potsdam, Kunst was the first woman to receive the “University Manager of the Year” award. Now she has again succeeded in demonstrating outstanding leadership – this time at her new place of work, Humboldt-Universität. To mark this achievement, DIE ZEIT and CHE conferred on her a “Special Award”, presented for the first time in its history. There are only very few cases of leaders having a successful long-term career in management at different universities.

Then, as now, Sabine Kunst impressed the jury members: “Ms. Kunst has integrated HU Berlin into Berlin University Alliance, clearly positioned the university, and created positive change dynamics at HU by taking transparent and cleverly coordinated standpoints. Given the difficult framework conditions, this was an outstanding achievement that can clearly be attributed to her as a person.”

In her laudatory speech, Dr. h. c. Edelgard Bulmahn, retired Federal Minister of Science and Research, said the following about Sabine Kunst: “Her many years of work at the German Council of Science and Humanities have sharpened and honed her take on the entire science and research landscape. She is aware of the complexity of science policy decision-making processes; she knows how to negotiate, overcome opposition, explore compromises and forge alliances in order to achieve the goals set. Experience that she can put to excellent use in her role as President of Humboldt-Universität.”

“Successful leadership and advancement of a university means ensuring that the different members are on board when working towards a goal. This is especially true in times of crisis. Good crisis management wins the trust and confidence of all members of the university. Rectorate and presidential board members, and staff in departments such as communications and IT have shouldered the difficult tasks of managing the university during the coronavirus crisis, alongside their leader. The award goes to them as well,” remarked Professor Dr. Frank Ziegele, Executive Director of CHE and member of the jury, who stressed: “I am particularly pleased that the award has been won by two women who lead universities. The proportion of female university heads was very low, but has increased recently; I hope this trend is here to stay.”

Besides Kunst and Steinbeck, the following were nominated for the University Manager of the Year 2020 award:

Information about the selection procedure:

The nominees were selected in a three-stage process.

Preselection: HEIs that undergo profound positive changes, and are therefore considered as having particularly strong potential for development, were identified by carrying out a data-based preselection. This procedure involved assessing data from institutions such as the German Academic Exchange Service, the Alexander von Humboldt Foundation and the CHE University Ranking.

Surveys: In the second selection stage, all university managers identified in the preselection process were questioned about their understanding of leadership and their various management activities. This year, particular attention was given to university leaders’ crisis management in connection with the COVID-19 pandemic and the handling of the crisis by the entire management team. To this end, the relevant vice rectors or vice presidents, chancellors or vice presidents of administration, and chairs of university councils were also invited to share their perspectives. Due to this year’s priority issue, the heads of the universities’ IT and communications departments were also surveyed for the first time. After all, they have also worked closely with university management during the current crisis management and taken on an important role.

Jury session: Taking into account the results of the preselection and the interviews, a jury of ten recognised experts selected the nominees.

The “University Manager of the Year” award was launched in 2008; it has been offered jointly by the weekly newspaper DIE ZEIT and the CHE Centre for Higher Education since 2013.
This year, the award ceremony was held within the digital theme week “ZEIT für Bildung”.

Information about the University Manager of the Year project